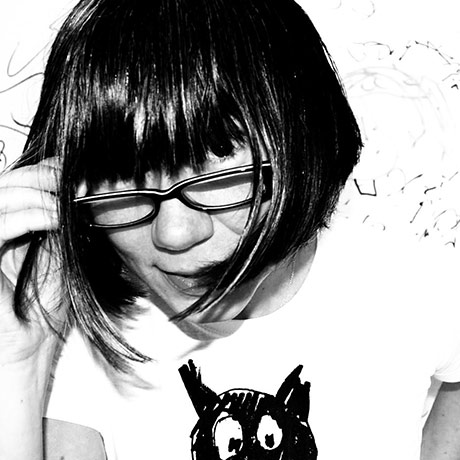 Rachael has been a succesful practising textile artist and designer since leaving the Royal College of Art in 1992 as one of the first post graduate students of Embroidery. Since then, she has become one of its most respected practitioners. Her graphic, lively sketches of everyday life typify her powers of observation and knack for catching the moment.

She has pioneered a lively mix of embroidery and screen-printing techniques, using image, text and object to tell – often autobiographical – stories of the everyday. Red Work is an Arts Council Funded solo exhibition of new work opening at The Waterside Arts Centre, Manchester this October 2014, then touring to The Williamson Art Gallery, Wirral with other venues TBC. For further details about Red Work click here

In 1998 Rachael had her first monograph with Ruthin Craft Centre. This “phenomenally successful” show toured nationally to 11 venues over a 2 year period and during its final showing at London’s Geffrye Museum had 32,500 visitors.

She is a committee member of the highly regarded 62 Group of Textile Artists and regularly exhibits nationally and internationally with the 62 Group. In recent years her work has also been included in a number of critically acclaimed exhibitions with other leading artists and makers, including ‘Storyville’ at Bluecoat Display Centre, Liverpool with Melanie Tomlinson in 2011, and ‘’Needle Works’ at Galerie Handwerk, Munich with Michael Brennand-Wood and Tilleke Schwarz in 2012.

Rachael has been involved in many public art commissions from cushions for benches in Newbury Library to a wall-hanging for the Museum of Science and Industry in Berlin.

Rachael has also worked as a freelance designer and illustrator for many companies including Paul Smith, Habitat, Liberty and magazines such as Selvedge. She has her own collections of ties and interior accessories which she sells at trade craft fairs and coming soon in an online shop.

Now lecturer in Textile Design at Bath Spa University, Rachael has previously been visiting lecturer at many universities and colleges in the UK and abroad including MMU, Goldsmiths and Central St Martin’s. She has received a number of awards for her work and teaching, in 1997 she was short listed for the prestigious Jerwood Prize for Applied Arts and won the Artworks Award for Art in Education in 2003 and 2004, whilst artist in residence at Lauriston Primary School in her then home town of Hackney. After living nearly 20 years in the creative hub of Hackney, East London, Rachael now lives in Wirral, where she grew up. Since then, Rachael has lead workshops for The Big Draw and outreach art workshops in her local community.

“Her work is not whimsical but witty. This is a subtle tightrope to walk…” – Polly Binns, Chair of the Crafts Council Collection”.